Up until this year’s World Cup, the saying went that ‘football was a simple game - you play for 90 minutes, and then at the end, the Germans win’. As stereotypical as that may initially seem it couldn’t be any more accurate, with the sport being the most played and most beloved throughout the entire country. Alas, over the last few decades we’ve seen the rise of many other sporting events across Germany, with basketball being one of them. While it may not immediately jump off of the page as a location that would specialise in the sport, they have an organised hierarchy which allows for high-level competitive action on year by year basis: and the name of the top tier league, Basketball Bundesliga, will be quite familiar to some.

History of the German Basketball

Courtesy of the Second World War, the history surrounding b-ball in Germany is a little ‘unfinished’ if you will. From 1939 onwards there was an organised league that took place, but courtesy of the war, basketball essentially came to a complete halt - until 1947 when things started back up again. Eventually, almost two decades later, a West German League that featured a North and South division was created, in 1964 to be specific. The variations continued up until 1966 when Basketball Bundesliga was officially formed, and over the course of the next few years, the number of teams allowed into the league was altered until they finally landed on the current figure of 18.
Unofficial traditions in Europe seem to dictate certain structures and customs for any given league, and that’s the case with Basketball Bundesliga. Every single team plays one another at home and away to make a total of 34 regular season games, with the top eight moving on to the always dramatic playoffs. There’s a best of five format from that point on with the winners being crowned the Champions of Germany, and dependent on where you finish in the league, there’s a chance that you can represent Germany in European competition with EuroLeague, EuroCup, Champions League and FIBA Europe Cup all being viable options. Oh, and you can’t get complacent towards the end of the campaign either, with 17th and 18th being relegated into the ProA division below. 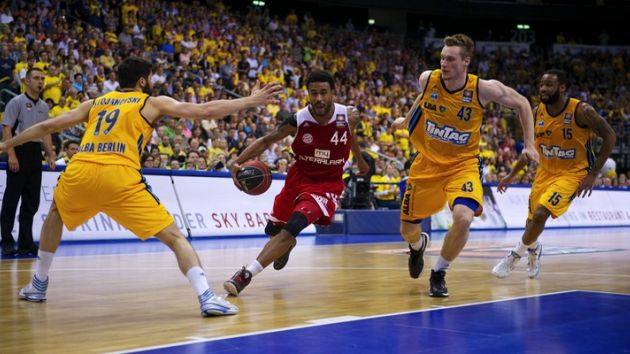 Something that the Germans employ that some others don’t, though, is the allowance for lower divisions to compete in their national cup - aka the BBL Cup. There are three specific knockout stages, and if a certain amount of teams apply to participate, then qualifying rounds are made as a result. A final four is then determined with medals being given out to the top three, meaning that there is technically the possibility of claiming the ‘treble’ (League, Cup, European) which tends to be more of a practice in soccer than anything else. On top of this, almost three-thirds of the league itself is owned by the clubs, with only a quarter belonging to the German Basketball Federation.

As we gear up for the 2018/19 season, there are a variety of clubs who will consider themselves contenders to take home the crown, and rightly so. The German league generally feels much more open in comparison to some of its European counterparts, and the attendances represent that, with every club being required to play in a 3,000 seater arena or more. The 18 teams who will challenge for the championship are Alba Berlin, Brose Bamberg, Crailsheim Merlins, Medi Bayreuth, Telekom Baskets Bonn, Lowen Braunschweig, Eisbaren Bremerhaven, Fraport Skyliners, Giessen 46ers, BC Gottingen, Science City Jena, MHP Riesen Ludwigsburg, Mitteldeutscher BC, Bayern Munich, EWE Baskets Oldenburg, Rasta Vechta, ratiopharm Ulm and finally s.Oliver Wurzburg. A mammoth eight teams from the league will be in European competition, too, although Bayern Munich will be the only EuroLeague representatives. 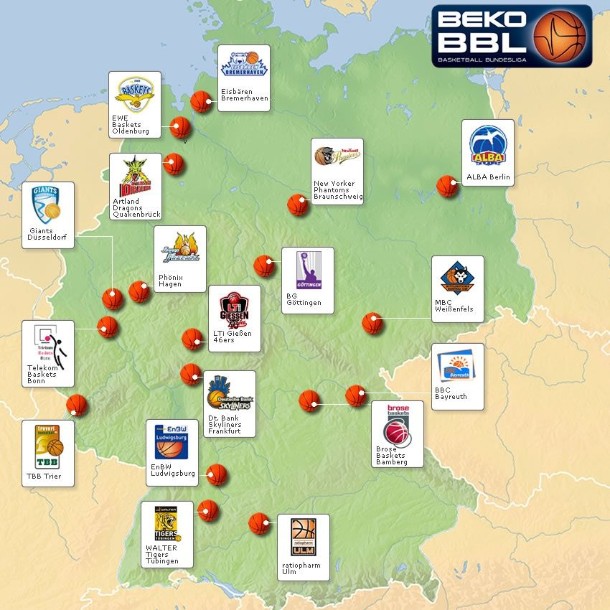 Throughout the course of history, the most successful team in German basketball is one that you won’t even see listed up there: Bayer 04 Leverkusen. From 1969 all the way through until 1996 they won a groundbreaking 14 titles, although due to a cut in funding, they suffered a dramatic decline and now play in the second tier as they continue to try and build themselves back up to the big time. USC Heidelberg and Brose Bamberg have nine apiece, with the latter winning all of their championships in an extraordinarily short space of time between 2004 and 2017 - including a four-peat. Bayern Munich are the defending champions, with four overall to put them joint 6th in the overall rankings.

While many fantastic German players came before it, the MVP Award, in its current incarnation, was first introduced way back in 1987. The parade of players from the United States have served as the dominant force in the league for many years now, with Wendell Alexis winning the title a record-breaking four times. NBA legend and arguably the most successful German basketballer of all time, Dirk Nowitzki, became MVP in 1999 before moving on to begin his journey towards superstardom in Dallas. 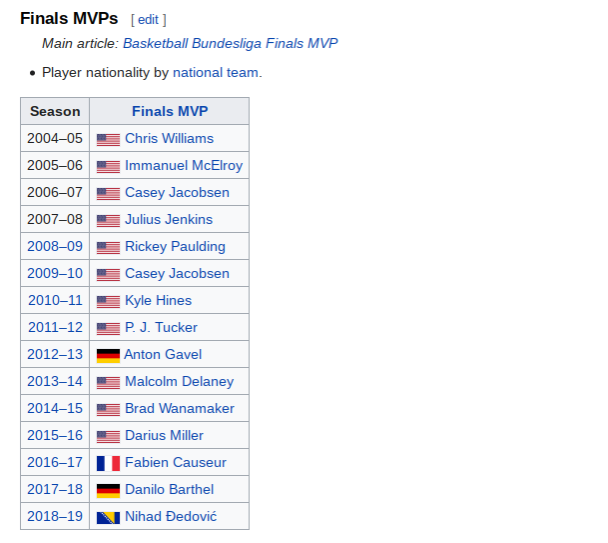 As one of the most popular sports in Germany now it’s hardly surprising to learn that they’ve got a growing influence over in America, too, with a handful of German teams recruiting stars from American universities that are unable to make their way straight into the NBA. The relationship goes both ways as well with more and more German stars popping up in the NBA, and while you may not realise it straight away, the rise of the sport has been gradual yet notable for a long time. From Uwe Blab to Shawn Bradley to Henrik Rodl, there’s no end to the talent that has been produced over the years.

There’s an argument to be made that the Bundesliga is one of the most exciting leagues to watch in the world, and no, that isn’t a reference to the soccer equivalent. It’s starting to feel as if any given team can go on a run deep into the playoffs, even though the most recent list of champions would make you believe otherwise. The format is strong, the attendances are good, and basketball over there is in a very healthy position.